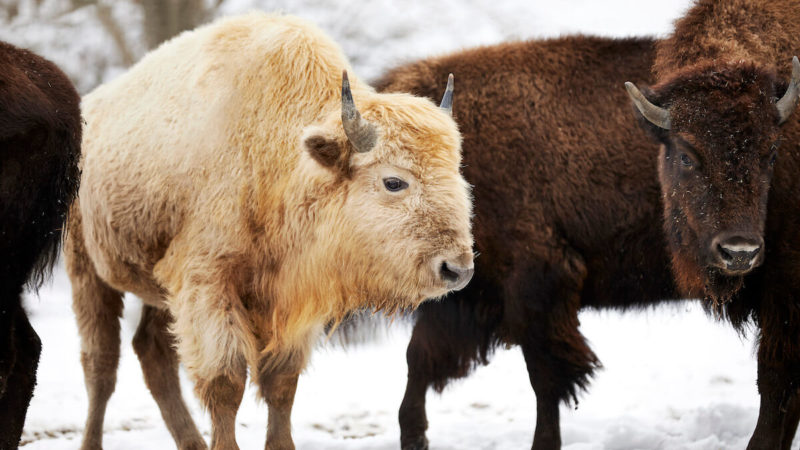 Visitors to Dogwood Canyon Nature Park in Missouri’s Ozark Mountains now have a chance to spot a rare white American bison. The new addition joined the park’s herd of 25 earlier this year and was named Takoda, a Sioux word meaning “friend to everyone”. Visitors to Dogwood Canyon Nature Park can see Takoda and the rest of the bison herd during the Wildlife Tram Tour, a two-hour guided ride through the canyon and into the ridgetops of Arkansas where herds of bison, elk and deer reside. Park officials hope the striking addition will provide new opportunities to educate the public on the unique history of the American bison and the delicate balance of conservation that saved the species from near-extinction.

According to traditional Native American teaching spanning thousands of years, the white bison is a sacred animal. Once an exceptionally rare occurrence, the birth of a white bison promotes prayerful communication between Indigenous people and the Great Spirit, and was also a sign of peace and good fortune. Today, though still rare, the phenomenon is more common due to crossbreeding with cattle as a result of attempts by ranchers to save the species from extinction after original populations plummeted between 1830 and 1900.

American bison roamed the plains of North America, spanning from Mexico to Canada. In the 19th and 20th centuries, poor wildlife management practices including market hunting led to dramatic declines. Experts estimate that by 1900, only a few hundred bison remained. Thanks to intentional efforts led by conservation leaders in the early 20th century, the bison remains an iconic symbol of America today.

“Welcoming a remarkable white bison like this to Dogwood Canyon Nature Park allows us to expand on the important message that Native Americans live out an unwavering conservation ethic,” said Bob Ziehmer, Senior Director of Conservation for Bass Pro Shops. “Their wisdom and understanding about the vital balance between land and people inspires our core conservation principals, even today.”

Dogwood Canyon Nature Park is located just 15 miles west of Branson in Lampe, Missouri and offers a variety of ways for people of all ages and abilities to connect with nature year-round. The park offers scenic walking and biking paths, horseback riding excursions and fly fishing for rainbow trout in addition to the popular two-hour Wildlife Tram Tour, a narrated ride through the canyon past waterfalls and handcrafted stone bridges that crosses into the pastures of Arkansas where visitors can see herds of American bison, Rocky Mountain elk, and white-tailed deer. Seasonally-themed educational programming is offered inside the Nature Conservation Center, an interactive learning facility that connects to a treehouse built by Animal Planet’s Treehouse Masters. The park is also home to the Dogwood Canyon Mill, a fully-functioning restored gristmill that pays homage to the rich milling heritage of the Ozarks, and a museum featuring Native American and Civil War artifacts.

Spanning 10,000 acres straddling the Missouri-Arkansas border, the property’s natural resources were once largely depleted due to decades of logging and mining throughout the early 20th century. Today, the park serves as a thriving habitat for native flora and fauna thanks to decades of dedicated restoration efforts led by Johnny Morris, Bass Pro Shops founder and renowned conservationist. The park is owned and operated by the not-for-profit Johnny Morris Wonders of Wildlife Foundation to ensure the public can enjoy the historically and ecologically significant grounds for generations to come.

To see Takoda and the rest of the bison herd in person, book a Wildlife Tram Tour today.